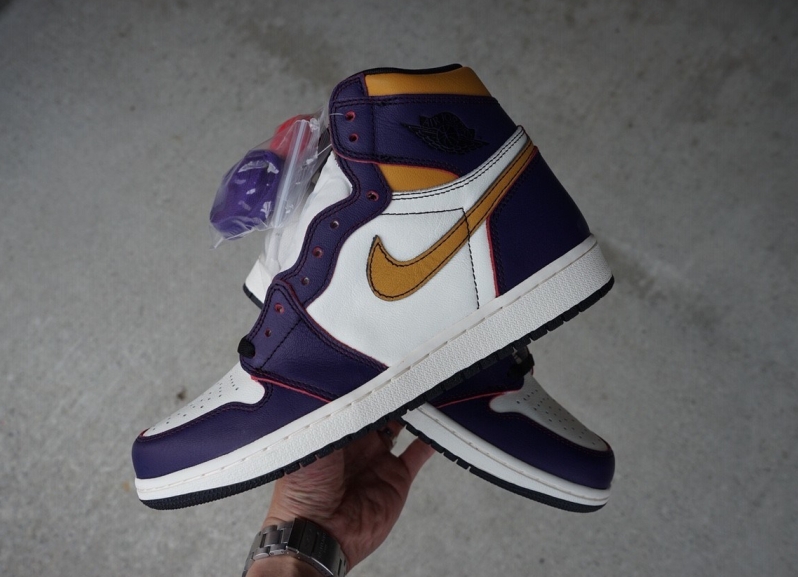 Before the release, everyone was raving and crazy about these….we are now 1 week after the release and it seems like the hype and demand for these has completely vanished.  So what happened?  …And are these a hold or a sell right right now?

I’m a huge fan of the concept of the scratch off paint and story behind this pair where the underlying colourway is a Chicago after the surface Lakers colourway is scratched off.  Nike has experimented this type of concept in the Lance Mountain SBs in the past where the initial colour is black/white and the underlying colourway is the classic BRED and Royal.  From the pairs, it seems like we all just want to strip the paint off right away and get to the bottom layer, but for many this might seem like a painful process and why not just get the underlying bred/royal DS pair right off the bat?  From a sneakerhead perspective I find the process of scratching off the paint a painful process and letting the natural paint wear off is a process I don’t want to endure because I personally love my sneakers clean and uniform.

From a re-sell perspective I honestly don’t see much going for this pair.  YES! the underlying pair is a Chicago 1, but from past Lance Mountain’s there wasn’t ever much re-sell premium on it.  I don’t know if sneakerheads are thinking the same as me, but I either prefer it to be fully Laker’s colour way or fully Chicago 1.  I haven’t personally tested the paint scratch off myself, but judging from the photos online, the chicago 1 looked more like an iron man colourway than a Chicago.  It also might be the fact the paint wasn’t fully scratched off, but I personally wasn’t a fan.

The current price right now is trending around $350-$400 USD and in my opinion, I don’t see prices moving much higher than this point until atleast later next year.  In addition, there simply has been just TOO MANY pairs of Jordan 1s released in the last half year and I think the wallets of many consumers are tapped out.  So if you were on the fence about these and wondering if you should cop now, you can probably wait a little to look for the best possible price as I’m sure prices won’t be moving much from here.  On the flip side, if you’re wondering whether you should sell now or not…this isn’t probably the best time to sell as you aren’t going to be earning much on it, but if you were to ask me I would personally put my money on other pairs that would have a better earning potential than these… (ie. The blue MCA Off White AF1s is looking like a hot release to take advantage of) 😉