Before we dive into this question…I have to make this clear.  Nike Dunk SBs and Nike dunks are NOT the same (in theory).  Though they are almost 90% identical, they are different. SBs represents Skateboarding with the traditional think tongue and dunks….just have the normal thin tongues.  They even come from different divisions of Nike.   With that said, today I talk about Dunk SBs and not Dunks.

For those that don’t know…SBs from 2002 was really what got me into the game in the first place.  Though I was heavy into basketball and idol Michael Jordan, but it was SBs that got me really wanting to wear sneakers and collect.  Needless to say, I’ve seen it all from the start till where it is today.  It doesn’t take a rocket scientist to notice that market prices are at an all time high right now.  Need proof?  Just take a look below.  But the question that has everyone asking right now is…does it has more room to go? 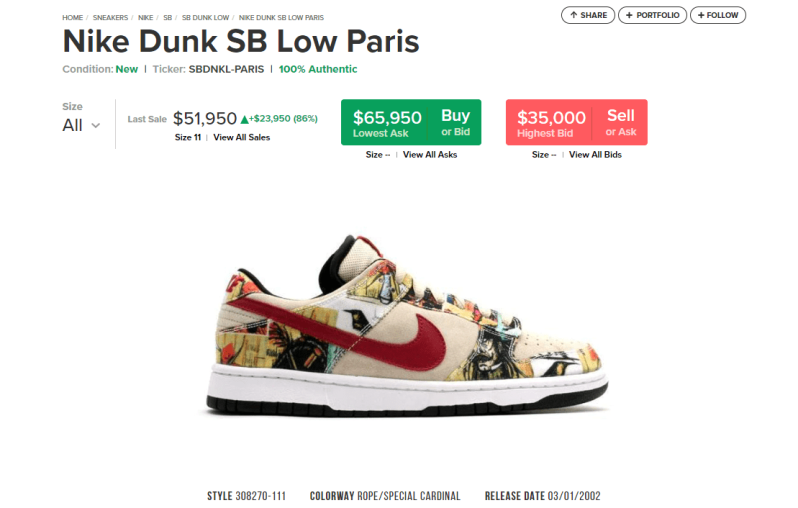 It was interesting to watch the price action this morning for the Chunky dunks as they dropped this morning – though it may be still a bit early, but we will find out where prices will settle by the end of the week.   I’ll be honest…these Chunky Dunks are amazing even coming from a relatively older sneakerhead.  It certainly got me wanting to buy a pair too even though I would most likely just display them rather than wear them.  From a business standpoint it certainly also is a potential profitable sneaker and this is leads me to my point today.  Nike is BACK doing what it does best – and that is creating desirable products at low quantities.  Dunk SBs is simply a tool Nike uses to build company value.  They don’t care if re-sellers make more money than they do on the sneakers because the incalculable indirect value they get from marketing and street/social chatter is worth WAY more than just selling a $100 sneaker that cost them $20 to make.

Diamond dunks with it’s infamous Aqua “Tiffany” colourway, Heineken dunks with it’s controversial unofficial collab that ended up in a cease and desist, Paris dunks with only 202 pairs in the world with every pair being different as a result from Bernard Buffet art work and lastly Pigeon dunks creating a riot in NYC – All these shoes have one thing in common and that is not only Nike created a good looking sneaker in limited quantities, but they created a sneaker to commemorate a certain memory or event and buyers regardless of era dig these kind of things.   Who doesn’t want to own a piece of history?  This is why when your home town sports team win the championship that year, you will drop money very willingly so you can own that hat, tshirt or banner to commemorate that moment.  This is what Nike is doing with it’s limited hype sneakers.  Every time I look at a pigeon dunk, the first thing I think of is the NYC riot.  This is not just a sneaker anymore…it’s an emotional attachment.  What makes this Chunky Dunk release such a success is because people that recognize Ben and Jerry as a brand will automatically gravitate to this sneaker and when you have a ton of people wanting the shoe, but with such limited supply…you create hype.

So back to my question…is SBs back and can it keep going up?  I would say SB has been back ever since Travis wore those What the Dunks as I see that as the spark of a uptrend.  Have I thought it would get to prices we see today…my answer is a definite NO.  To answer whether or not I think prices can continue to go up really depends what Nike has left in the bag.  Nike has made it clear that for year 2020 is a big push for dunks across the board, so I wouldn’t be surprised to see prices to keep going up till atleast the end of the year.  But one thing I do want to caution is that though things look super glamorous for dunks RIGHT NOW, I can say with certainly things will not be this great forever.  Everything has cycles and for SBs, I have seen atleast 2-3 times where it went through serious price declines…so I don’t expect anything different this time around again.