If you’re looking for the short answer on where the price on this pair is heading…then 1 word….UP.  As usual you know the drill. I’m always going to be late in providing my analysis on price expectations because as mentioned before there is a conflict of interest for me to provide my analysis and thoughts on prices right after the release because it’s still within the time frame of our buying process.  The first 1-2 weeks is the most sensitive time frame because no one knows where prices are headed and everyone is still trying to feel for the direction of the re-sell price.  This just doesn’t pertain to re-sellers, but also to individual buyers looking for the best possible time to cop their personal pair.  If I came out and say right away I know this pair is going to skyrocket in price, I’m indirectly shooting myself in the foot by having everyone think the same way and prices will go up and making my cost more.  The only way I will do the analysis right away is via a paid blog post so only select people get this info and not to the general public where everyone can free-ride and act on the info.

So you already know my answer to this one, but here is the reasoning and thought process behind it.  First thing to talk about is the aesthetics of the shoes.  At first glance of the shoes it may not have been a right off the bat must-have as the design of the shoe was a little bit different from past Parra collaborations with Nike.  I’m sure when we hear Parra the first 2 pairs that comes to mind are the Amsterdams and Cherrywood, which by the way are nearly impossible to find in the market right now even if you had the money.  This recent release was more of an acquired taste in my opinion, but what does this mean in terms of re-sell? From a re-sell perspective this is awesome because everyone is so lost on how the market will react to the pair that most would rather sit on the side lines and see where it goes before committing to play it safe.   Sure the re-sell will definitely be over retail, but to my surprise the re-sell trending the 1st week wasn’t so bad at all…atleast I would have expected higher for this type of release.  I was originally going to pass on this release mainly because I was super pissed how Nike released them in Canada until a few of my friends contacted me 2 days later to ask if I could help secure them a pair. These were friends that rarely buy shoes nowadays, but when they ask for shoes it must appeal to them as a must have and it triggered me to think differently.  Then I started tracking the price movement more intensely and I liked my odds of this pair doing numbers in a few months- years’ time so I did what I do best to work my network to secure as many pairs as I can – at re-sell price of course.

One of the things I also look at is the quantity released on the market.  Though none of us have concrete answers to exact amounts released on the market, we can make proxy guesses based on the available market information.  One of the easiest proxies is knowing the releases locally in your market.  To say the least, this release was SUPER limited and literally only 2 stores had them available in Toronto and my guess (which most of time is fairly accurate is maybe each store only got 50 pairs).  Minus out the employees and backdoor pairs and etc…there aren’t too many pairs that made it to the market and this is quite obvious on our local buy/sell marketplace in Toronto as there are literally more “WANTED” posts than for sale posts.  The only respectable pair for sale is a 9.5 bought from StockX and not even from the local stores here.  The second proxy I check is the StockX volume of this pair relative to other limited drops to see how many pairs have turnover.  This is not the best gauge, but it’s a decent one to know what’s going on in the world.  From a turnover perspective it’s at 1760 sales which is fairly low compared to other major drops in the year and that is a good indication quantities released were not huge at all.  If you knew nothing about shoes but understood simple supply and demand, you already know where prices are heading. 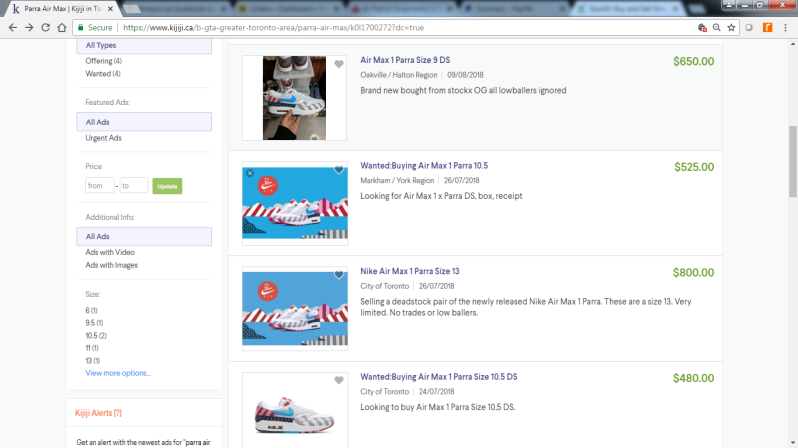 Personally I wasn’t a fan of these in beginning, but I must say I am a big fan of the Spiridon release more so than the AM1.  However, I told myself it’s not always about what I like, but more so what other people like from the business aspect.  After seeing the pair in person, I must say the quality and packaging was done well and I can certainly see this shoe being a $600-700 shoe in no time.  From my experience, releases like these usually does very well in the long term especially on an Air Max 1 silhouette.  Though I personally love the Spiridon much more, I can’t say the same about it in terms of future re-sell prices.  Hence I only needed 1 pair for my personal consumption but I went VERY hard on the AM1 release.  As part of being a re-seller, the hardest part of the job is judging how well a shoe will do in the short-long term and deciding how much money to allocate to invest in a pair of shoes.  One wrong move could be costly especially in this year when there are so many fire drops from Nike and if you are not staying atop on your cash budgeting, you could miss out on other much profitable deals.  For the average consumer that is buying a pair for personal consumption, an extra $50 more than current prices won’t break the bank aside from making you feel like you could have gotten the pair for cheaper, BUT from a re-seller standpoint, we usually go way more than 1 pair and $50 less/more can make a difference on the bottom line.  Last but not least…if history was to repeat itself…just look at the Atmos 1 Elephant release last year…resell right now is hitting as high as $800 on select sizes on StockX and I remember I was buying pairs for only $450-$500 few weeks after the release.  So if you think these Air max 1 parra will keep going down…I think you should think again.