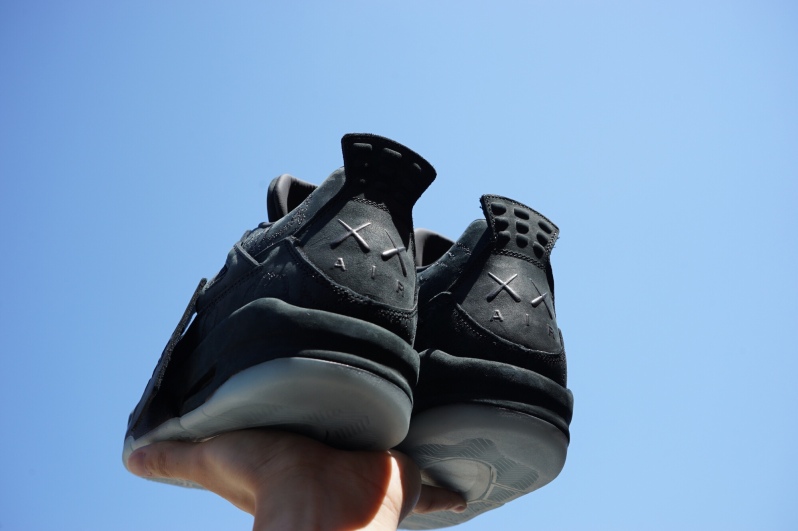 2017 was a pretty crazy year for Nike x Jordan as we saw quite a few hyped releases drop with one being the Nike Air Jordan 4 collab with KAWS.  When the first Jordan 4 Grey version dropped earlier in the year, it was a great because they had sick apparel to go alongside the shoes, which in my opinion is a lost art in sneaker releases.  Shortly after the grey version released, there were images surfacing about a friends and family black version that hit the internet that went viral very quickly.  Being a Kaws fan, I could only hope that they released more colours so I could collect them all.

The release of the black version was definitely very odd to say the least.  The grey version was first released to retailers and then later saw a Kawsone release shortly after.  With the black version, they were ONLY released on Kawsone…so far.  At the time I was super confident that they would hit retailers after because I assumed Nike probably wanted to play around the release method to learn what worked best.  It’s been more than 7 months and no one still has a clue and we are starting to believe it probably won’t happen, which is fairly odd.  First off, the Kawone black version release was made specifically for those located in the US only to purchase.  If you didn’t have a US mailing address, you wouldn’t be able to purchase on the site.  Well I’m Canadian and I’m used to this…but what about other parts of the world?  Just from this, I was super confident the release would happen worldwide shortly after because from Nike’s standpoint, there’s NO WAY they would make quantities that limited on this pair.  Maybe I’m wrong, but as of today I’m starting to believe the release to retailers won’t ever happen with the Nike Air Jordan 1 Off White EU White version being the perfect example, keeping it local only.

If you take a look at StockX today the 12-month volume is sitting at 2317…that’s a lot of transacted pairs over a 7 month period.  Though I can’t verify if the same pair is bought and resold multiple times, but I highly doubt it.  With that being said, I guess the KAWSone release did have that many pairs to serve up on release day.  So why are re-sell prices so low and where would it go?  In my opinion from similar type of series releases in the past, usually the original colourway will always retain its value as the original.  All subsequent colours will usually trend lower.  I think many of us might still be expecting a wider release from Nike and are refusing to pick up a pair given we think we “might” still have a chance at retail price.   In my opinion, I don’t think the wider release will happen and once people realize that… prices may start to go back up.  By theory, the black pair should be more limited in numbers compared to the grey and if you ask me, I certainly would expect prices to go up based solely on basic supply and demand.  Demand obviously is lagged at the moment given the expectations from consumers, but I think prices for these will slowly pick up as soon as late this year.

Will there be future colourways of the Kaws 4 come down the pipe?  Possibly given 2019 is the year of the 30th anniversary of the Jordan 4 model next year, Jordan has a history of doing big things on the “anniversaries”.  The Jordan 3s this year was a classic example, but it came in the form of a ton of general releases rather than limited releases.  I personally don’t think any future Kaws 4 model will come out anytime soon given the vast amount 4s that already came out this year…(Travis scott + upcoming rumoured colours, Levi’s 4s).  Kaws also openly confirmed the olive pair is fake, so I guess we can all kiss that dream goodbye.  If you ask me, I obviously stocked up 2-3 pairs for myself on these because at the end of the day…they are KAWS…haha. But at $750, you can pretty much pick up a pair on StockX and to me that’s still a really good price, but if you want to buy and re-sell for quick flip, you probably want to stay away.  If you are more towards the long term buy and hold flip and eye candy it for the next few years, then this is a good pair to buy.