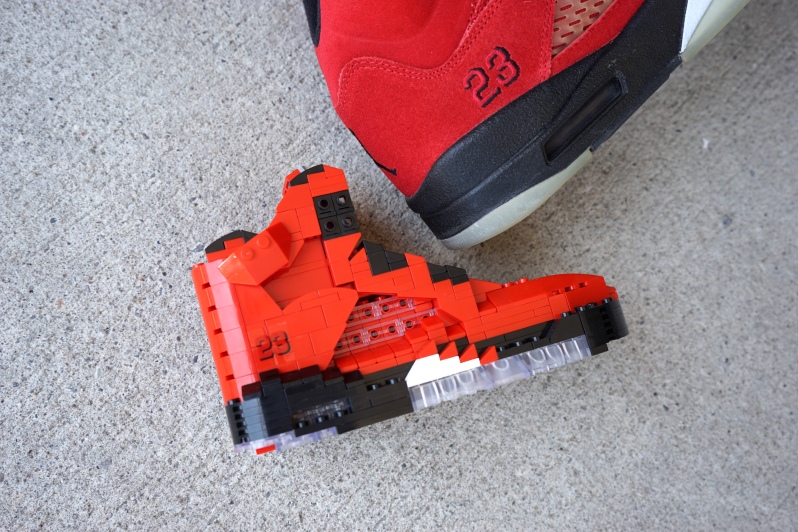 After 7 long months since the launch of Series 1, we finally made Series 2 possible.  I don’t know where to start because the initial concept of the creation of this new product was to set us apart from everyone else and be different.  I wanted to break the image of a re-seller and be an individual to create and add value to this culture.  Re-selling was a start because it was the most logical step to take to establish yourself in this ever growing culture, but at some point it was time to evolve.  No lie, at one point I seriously thought about the easy route of re-selling other sneaker related items that was readily available on the market or creating our own branded merchandise prior to Series 1.  However, I honestly didn’t want to follow the path that others have already created.  I wanted to carve my own path and have others follow. 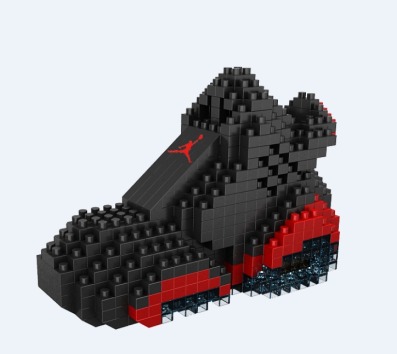 Our first stab at a sample.  Yes, i know we came a long way.  We initially wanted nanobricks to start with a low cost item, but that didn’t work out.

Series 1 we decided to go with the Jordan 6 black and white infrared because the design was simple and simple was what we needed in our first product.  With zero connections in this field…and I literally mean ZERO connections to any manufacturers or anyone with manufacturing experience I was literally looking for a needle in a hay stack for a manufacturer that would listen to my idea.  To make things even more difficult, finding the right manufacturer that wouldn’t just take my money and run made the beginning steps of this whole process exponentially more difficult.  And if it already doesn’t sound difficult enough, try doing all this when you are on the other side of the globe talking to reps where English isn’t their first language.  For many, they probably would have given up by now because it seemed like for each step forward you take, it felt like a 100 more hurdles presented itself.  Even just explaining a simple change on the design by adding an extra brick in one area took numerous explanations and diagram drawing to get everyone on the same page.  Did I ever wanted to drop this idea and not proceed with it?  Hell yes…but my mom once told me…I had great ideas and momentum in starting things, but I never followed through till the end.  I guess I did prove her wrong just this one time.

Explaining to the manufacturer that we needed a Red line to mimic the back tab and change the colour of the clear air unit took a lot of explaining through email.

When I finally found the right factory, then came another major hurdle.  MONEY! With zero experience and my first attempt in exploring a concept that has never been done before by anybody at this scale, it was in my best interest to start with extremely small quantities to test the market.  However, from a manufacturer’s point of view, they have minimum quantity requirements and let’s just say it was WAY out my comfort level.  I tried negotiating, but even with minimal negotiating  we were still very far in terms of lowering the minimum quantity.  It wasn’t easy dropping almost your entire year’s after tax salary on to one order with absolutely ZERO guarantees.   At the end of the day, I took the leap and did it anyways because this is how I saw it.   The harder something is, the better the chance I have in succeeding because there will be less competition.  On the flip side, if something is too easy to do, there will be tons of competition looking to outrun you.  So I take it that not many people out there is willing to risk their entire year’s take home salary for something that doesn’t guarantee a return.

Our Outer box packaging as you can tell was inspired by the Bloomberg B-unit.  Simple, yet sleek.  Though it was an added cost to upgrade to a similar type of packaging, it was definitely worth it.

Then came another hurdle…how the hell was I going to import all of this into Canada?  I certainly couldn’t do it via Fedex or UPS…LOL. After numerous conversations and asking around and doing some research, I finally found an agent locally that would do it for me.  Like I said, I had ZERO experience in this field and knew NO one that had this type of experience so it was a huge learning process.  Who knew there were terms for different types of importing/exporting…FOB, EXW.  This was like learning a new language on the fly.  Obviously I ended up connecting all the dots with the release of Series 1 last year, but did sales meet our expectations?  Good question.

The initial product reveal was AMAZING – everyone had nothing but good things to say about it, but did all this translate into great sales numbers? Not exactly.  One thing I failed to understand initially is even though your product is appealing, getting your customers to go into their pockets and pull out their credit cards/cash is a whole different level of learning.  I had absolutely no trouble of re-selling Jordan’s or Nike shoes because that’s EASY.  The shoes itself doesn’t need any further marketing because it’s already in demand…you simply need to source it at the cheapest price possible and sell it for a lowest price profitable and you’re set.  It honestly doesn’t require much skills.  This skill DOES NOT translate well when you are trying to market or sell your own product.  Had I known this concept, I would have re-done the entire Series 1 marketing plan and done things SUPER differently.  However, I’m extremely receptible to making mistakes because that just means there is room for improvement the second time around.   At the end of the day, am I happy with the results?  I guess I should be.  From a business point of view, I probably could have made more money investing in something else, but creating something of your own and leaving a your own mark in the culture is on a whole another level.  I don’t always have to profit in everything I do, but when customers take the extra effort to thank me for creating such a great product and having YOUR product displayed in their homes, that means much more than just how fat your bottom line is.  I’m always a true believer of the saying… “If you never try, you will never know.”