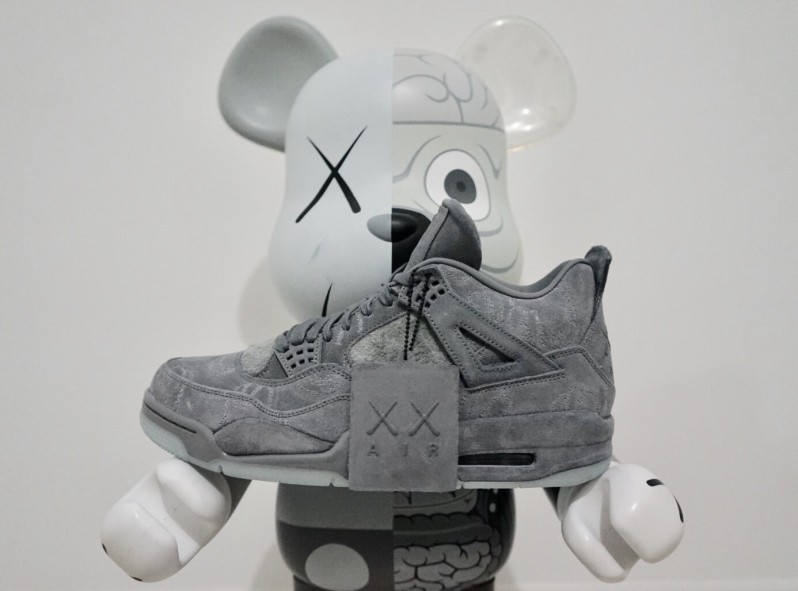 Last week I met up with a seller for a pair of Kaws Jordan 4s.  I don’t have a store front so sometimes people drop them off depending on my location that day.  Anyways, the price was relatively attractive and we got down to business.  Jordan Kaws 4 is a relatively new release and it is rather difficult to tell without a pair side by side to compare.  I wasn’t prepared to bring a pair with me just for the sake of comparison, but i did review all the legit pairs i had to recap how it felt in hand and anything out of the ordinary I would be able to distinguish.

So when i first met up with the buyer, i saw the box from afar and something told me it didn’t look right from the get go.  The box was relatively flimsy and wrinkled, but to be fair I had to check out the shoes to be sure.  I opened the box and everything didn’t look right to me…the paper inside just felt a lot thinner and just didn’t feel the same as all the other legit pairs i reviewed earlier in the morning.  Good thing I referenced @fakeeducation’s post before hand to review what to look for, but all the red flags were there – flimsy hang tag, super bold heel X X Air logo.  For the record if you stripped out all the accessories, i honestly probably wouldn’t be able to tell they were fake.   That’s how scary the quality on fakes are nowadays.  After all that, then came the hard part…how to break it to him that they were fakes.

Its always easy to bash ppl that own fakes and hate on them with will through social media because you don’t have to deal with the face to face awkwardness of their reaction. Social media allows hate without social responsibility tagged to it. Trust its not that easy when you have to tell someone in person your shoes are fake in a nice way.  For the record, its hard to say if he knew that what he had were fakes because he could be the victim as well.  In this scenario, he told me he got these through a trade locally and hence didn’t have receipt.  For this particular pair I always ask for receipt because only 2 stores had them in Toronto and if you didn’t get them in Toronto there would be no way they would be selling at $1400 CAD (approx $1k USD).  The irony comes in because at the same time I don’t encourage him to sell to anyone at that price because they’re fake, but how could he recoup his cost?  I’m not a supporter of fakes, but I also feel for him because $1400 is still a decent amount of money to swallow as a loss.  As i can see the disappointment in his face, I couldn’t help but say you probably ain’t getting your money back from the guy he traded them for.  Not everyone is a nice guy.

Anyways, a lot of you guys out there say re-sellers don’t add value by manipulating the market and preventing those that want a pair from getting it.  I don’t entirely agree because a lot of you lose sight of the value we bring.  Being in the business you don’t know how many fake pairs are there in the market that i’ve seen.  I can’t speak for other re-sellers, but as for us, we provide you the peace of mind that everything you get from us is 100% Authentic because that’s our job to protect the integrity of selling fakes.