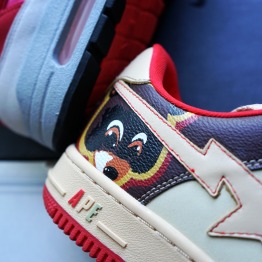 I consider myself lucky to be part of a sneaker era at a young age. Being able to live through the Jordan Era and watch MJ at his best and see how he has changed the sneaker world forever, sometimes these experiences can not simply be purchased with money.  You honestly have to live through the time to really understand.  There are tons of literature about sneaker culture nowadays, but to fully understand, it has to be experienced.  Though this article isn’t about MJ, its about an icon that has totally reshaped the sneaker culture over the last few years.
First thing most sneakerheads think about when the word Kanye resonates is…YEEZY.  Yeezy jumped over jumpman?  Well we’re still early in that conversation, but honestly only time will tell.  I’m not going to lie, what Kanye has done so far is remarkable and I honestly didn’t expect that when he first emerged.  I think his status didn’t really catch fire until his LV and Nike collaboration.  Both still very sought after even with the new Yeezy Adidas.  However, today’s post is really about 2 pairs that most people don’t know about, but both had traces of Kanye in them.
1. Bathing Ape x Kanye West Bapesta “College Dropout”
This pair was released in collab with Bathing Ape back in 2006 when Kanye’s College dropout album dropped.  They were released in limited quantities, but the price on them initially weren’t outrageous.  Even till 2 years ago, I was able to scoop up quite a few pairs for the low low. I’ve gotten as low as $250 for a DS pair with OG box.  $250 not $2500!!! Fast forward today, you won’t be able to come close to getting a pair at that price because since the emergence of Ian Connor rocking them *in my opinion*, all the hypebeasts caught on and the price for these has sky rocketed up to come in line with Yeezy boost prices.  Looking back, it would have been great if I held on to them, because i would have simply 5-7x my money no problem.  Btw, hindsight is always 20/20
2.  Nike Air Max 1 CLOT x Kanye West “Touch the Sky”
This pair was released in conjunction with Hong Kong clothing brand CLOT founded by Edison Chen and Kevin Poon.  I highly respect the Clot branding for what they have created and developed for the Asia street culture.  This pair is probably the most rare pair out of all of Kanye’s collaborations.  This pair was created for friends and family during Kanye’s Touch the Sky concert in Hong Kong.  It was rumoured to be only 4 pairs in existence, but I highly doubt that because i’m pretty sure Edison had more than 4 friends to share this shoe with.  But regardless, lets just say they are super limited.  I still remember these were so limited, that people actually reverted to Nike ID to re-create the same colourway to mimic the pair, but obviously without the CLOT laser printing. I’m not sure why Nike ended up removing the option to make this colourway, maybe it’s to keep the colourway exclusive, but whatever the reason, that is why you see a lot of these colourways with NikeID boxes.  As you can tell, I own a F&F pair with the CLOT laser logo.  I remember copping this pair about 5-6 years ago in Taiwan for about $2,000.